Active Citizenship is thought to be the usage and exercise of one’s political rights that an individual has. This commonly takes place in contemporary America by voting in elections, joining a political organization to further a political agenda, and other spheres that ordinary Americans can take place in political discussions. Increasingly more Americans, and others from around the world, take their political ideologies with them online over the world wide web. As a result, the internet is another place and medium in which ordinary citizens can interact politically among others in their community, or with elected officials directly in some instances. This brings about the idea of both formal and informal ways in which we can express ourselves and our political rights. The formalized process in which we can use our political rights in voting or becoming an activist in our own ideology. The informal often refers to the gap between the formal process and zero engagement within our society. Therefore, any non-formalized discussions are often taking place in new spheres of interactions between individuals. With the wide range and availability of the internet, we have seen the growth of social media companies, like Facebook and Twitter. This shows the ever increasing amount of people using their websites to gather information and make informed decisions. Using newer spheres of engagement allows ourselves and our communities to easily spread ideas and thoughts. However, these new mediums in which people are conversing in are not always perfect and potentially damaging interactions regarding miss-information can easily occur. 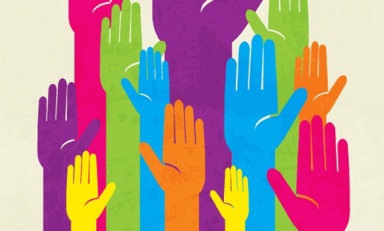 While in the past, Political discussions were mainly limited to communication within a group of constitutions within a given area. While this area slowly expanded over time, the concept was relativity the same. For example, In the case of Nelson Mandela having been arrested in South Africa for his political views, he communicated with the guards as being a part of his immediate community. Mandela had believed everyone had the potential to understand the reasoning behind people’s motives, and often talked to his guards if he thought it would be beneficial. “In general we treated the warders as they treated us. If a man was considerate we were considerate in return. Not all of our warders were ogres. We noticed right from the start that there were some among them who believed in fairness” (Mandela 80). This would be viewed as a formalized political discussion that Mandela and his followers presents to the guards. They did not have an opportunity while in prison to interact over the internet or through other modes of communication. Nelson Mandela was actively engaging in the community that surrounded him, and as a result he was actually participating in active citizenship.

Similarly, in Soul of a Citizen, Paul Loeb describes cases where some of the poorest living people had come together to talk about their issues and later form political discussions about what needed to be done. Loeb Talks about an existing group called COPS, Communities Organized for Public Service, and how that group spurred Virginia Ramirez of Texas to take action in her own community and hold a local meeting without the COPS organization’s involvement. Virginia wanted to help others in her community and decided to hold a meeting of her own. “Virginia had never conducted a meter…She could barely open the door. But gradually people began to talk of their problems and experiences. Their neighborhood had been thrown together at the cheapest possible cost, built for workers….” (Loeb 24). Virginia had become an active citizen, and helped her community and surrounding neighbors by pulling them up along with her. She was able to give some of the poorest people in Texas a voice that could reach some of the highest political committees and discussions in Washington D.C. Virginia had also practiced some type of formalized discussions, whether that was holding a meeting, or testifying in front of the United States Senate.

These previously stated examples show how powerful formal interaction between others can have a lasting impact in the community at large and for the specific individual it works to help. Active citizenship the most popular way for average person to bring about change in society. Whether it’s in Virginia Ramirez’s case of helping her neighborhood get the funding and services they deserve, or perhaps a band of citizens who care about the environment in their immediate surroundings. If there is anything that active citizenship teaches us, it is that we need to speak out about issues that are important to us. There are likely others who may have an opinion in which an intellectual debate can occur. However, only having formalized meetings and rallies is not always the full picture of society today. In recent history, we have seen the explosion of new technologies and larger advancements in existing technology. As a result, our society has adapted to the idea that our political outreach could be informal in some ways as well.

Please click here to view the next part: Potential Dangers